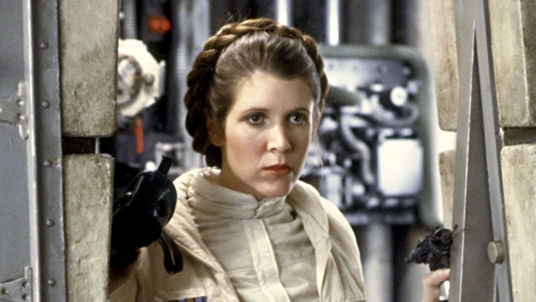 I got the news that Carrie Fisher died two days after seeing Rogue 1. As always, Princess Leia’s appearance on the screen made my heart leap with hope and excitement in a way that no male hero ever will. She gave my generation of women exactly what her character held up with her final line – “This is hope.”

Princess Leia was the first – and for a long time the only – female role model who got to command the rebel forces and win. She was the precursor for changes to the James Bond woman – smart became sexy, and power now frequently comes with the prize of the best looking guy. Princess Leia had what my daughters now call Sass. We adored her. Those of us who jumped into this fantasy of George Lucas’ creation went after the evil empire and organizational models of domination and control with a great sense that the Force was with us and somehow light would prevail over darkness. I am forever grateful to Carrie Fisher and George Lucas for this vision. It has changed and enriched my life.

We also learned some hard lessons from this single model of female leadership. Too much sass to the leader really does get you blown up – in ways that are often painful and destructive. Leaders are often secretly and surprisingly vulnerable, and it takes an extraordinary leader to respond well to defiance, to demands for immediate action, or even to well intentioned but uninvited feedback which would require fundamental shifts in an organization. In Star Wars, Han Solo, Luke, and Leia often rescue each other at the critical moment of the battle, or after a moment of sass and daring gone wrong – like those rare but precious managers, colleagues, and mentors who will get us out of a tight spot when a job needs to get done. Han Solo reluctantly leverages his resources to drive the team to victory – he has the fastest ship and the biggest furry friend and when he agrees to help out – yet again – we all breathe a sigh of relief. These are the exciting moments of drama and victory – but we do well to remember that Princess Leia and Luke win because they also seek out and listen to the older, wiser, deliberate, and disciplined Obi-wan and Yoda advisors who redirect sass and outrage to savvy action and extensive networks of support. Real human mentors pick their confidants carefully, and must demand trust and respect in return for their advice and protection.

George Lucas populated his movies with a rich diversity of characters, contrasting them sharply with the white bread same-same of the imperial storm troopers. Star Wars’ rebel leaders and Jedi knights all move through their diverse constellation of humanity amazingly effortlessly, in surrealistic contrast to the rigid command, control, and compliance culture of the empire. It took a long time to reveal the human behind the mask, the traumatic life experiences which turned good people to the dark side – and the strong call of humanity that brought them back. The struggle to work with diversity – to take the time to understand the other – is still hidden from view. We never see the sense of feeling threatened, the choice to become curious about and respectful of the other, and the time invested to build understanding across the Rebel Alliance and across Han Solo’s band of rogues.

The Force is strong with Luke and Leia. In real life, I think the Force is closest to unflinching integrity to strong values – and the light sabre is a set of workplace skills that leverages the unwritten and implicit power structure of organizations to fuel the vision and trust of good leaders, while containing the damage done by those who – at least for the moment – have moved to the Dark Side.

The Dark Side of leadership has much in common with the many, many evil empires in the movies, and those of us who only had Princess Leia for a role model perhaps felt the terror of human manifestations of Darth Vader a bit too keenly. It takes a special breed of human to stick with the rebel cause for decades. This is an essential role to play in moving the world to a better place, but it is not the only solution and it is not always necessary. There are rich, warm, planetary systems to move to that do not require us to hide alone in caves, on desert planets, or in a swamp on the jungle planet of Tatooine. Savvy people often move early in their careers – “for a better opportunity” – and as many times as is needed to find a hospitable environment for their dreams and values. As they leave, the strategic ones do not give in to the impulse of the Dark Side, which would have them burn everything in their wake. Instead, they continue to build relationships which may reopen in a more positive light sometime in the future.

The fully grown Carrie Fisher gave a piece of advice to her protégés that is a new one for women but is becoming louder and more insistent – “Never let them make you a slave.” She was referring to the gold bikini scene with Jaba the Hut – which I suspect fuelled a number of unsavoury male sex fantasies that followed Carrie Fisher in the flesh for the rest of her life. Healthy boundaries are new for many women – and for many people. We are still clumsy in expressing them consistently, but this skill is fundamental and powerful. Diversity is not always easy, but bullying, racism, misogyny, and religious intolerance are no longer OK. The women of my generation, who were advised to not take risks with their personal safety (which essentially meant giving up one’s power and freedom), to dress modestly (rather than expressively and beautifully), and to never risk expressing anger or ambition (which reflect an expectation that our basic personal needs should be treated with respect and dignity). My daughters’ generation has words and ideas like slut-shaming (reframed to self-esteem and positive body image), rape culture (shifting to a growing expectation of explicit consent), and structural violence (previously known as the concrete ceiling – now replaced with inclusive design that removes obstacles and works better for everyone).

We must learn to use these boundaries respectfully and constructively, in ways that are firm, calm, and clear rather than violent and angry, but this next step is an important part of the puzzle and the power of the Force. The fact that many leaders are making public statements that organizations will continue to embrace diversity and protect the vulnerable – in the face of a Trump Presidency – is evidence of a collective tipping point in this journey.

Thank you Carrie Fisher. You got a lot of us to the table, and while some of my generation got ourselves fired for spitting in Darth Vader’s face, we had a great ride and the next generation has learned from our mistakes. May the Force carry you to a universe which is filled with love and light. May you find a place where everyone has the opportunity to bring their best to the table and be heard – in the middle of the grandest creative adventures you can imagine.