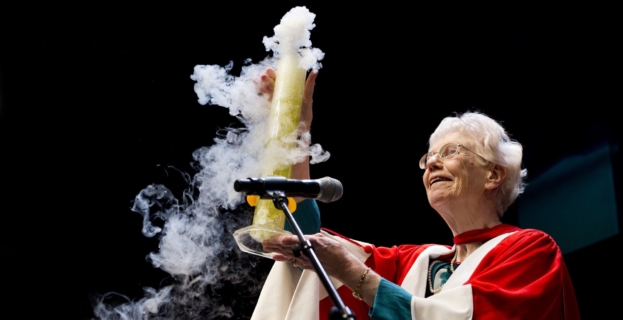 Margaret Ann Armour was a remarkable colleague, and one of the strongest people I have known. It is remarkable to me she died only a few hours before Concordia’s convocation where she was to speak to graduates and receive an honorary degree. I can imagine her frustration that she would “cause a fuss.” She would have been pleased, proud, and humbled by the honor – and her selfless sense of duty would have compelled her to show up for the students – and the organizers. I can hear her saying, “Oh but people have gone to so much work to make this happen!” in her gentle brogue even as she was trembling from exhaustion. It seems the university was gracious enough to confer her degree in person on Friday, once it was clear she would be too sick to attend the ceremony on Saturday afternoon.

She once reprimanded me – I can’t remember whether I was impatient with a student, or cross with a colleague who was slow to understand the impact of their behavior on others – but I was very clear that the situation was black and white. She was very clear that anger was never an option. I sighed. Her saintliness was sometimes demanding, and always inspiring. She lived (and died) by the power of love – once explaining to me that when people love you, that is a kind of deep power that must be respected and acknowledged, just as much as one must respect the power of the organization and its leaders.

I once sent some of my students to her office for help and advice on handling of hazardous chemicals, and they returned a couple of hours later for advice. “She lent us her books but didn’t take our names or anything. Is this OK? She said she trusted us and knew we would bring them back.” I smiled. “Was she right?” “OH YES!” “Well then, there’s nothing to worry about! Make sure you do a good job and go back to ask her questions if you get stuck.” “You’re sure?” “Yes. I’m sure.” This is the magic of what I came to call “Fairy godmother blessings.” She shared them with all of us.

Margaret Ann was a war baby who grew up with a single mother in a time when it was necessary to explain this as, “Father died during the war.” She would smile gently and say, “Of course I never met him.” She and her mother were very close, as she was close to Ursula Franklin, who survived both the concentration camps and her life’s work as a very early female, engineering professor at the University of Toronto. Ursula Franklin was infinitely wise, and gave a series of Massey Lectures about the interaction of technology and society. She was a Quaker, who famously lived by the mantra, “Peace is not the absence of war, but the presence of justice.” I know that Margaret-Ann found these powerful words to live by.

When Margaret Ann was working her way through the last few years of her life, and through a series of medical challenges, she asked only for complete privacy with minimal questions, and to be allowed to continue to work. She felt a sense of urgency that there was so much left to do – and only reluctantly passed much of the heavy lifting to others. We were all so thrilled that she was given the gift of her school, as this gave her enormous joy and served as such a testament to her life’s work.

The joy and inspiration she gave to many young women qualified her for rock-star status as the mid-wife of their dreams, and it is this legacy which touches all of us most deeply. Even as we mark her passing, we must celebrate her remarkable life, her exemplary kindness and high standards of conduct, her warmth and her willingness to mentor and pick up the pieces on a difficult day. None of us will ever forget the joy on her face as her beakers gave off smoke and turned purple. Her delight was the highlight these demonstrations of physical transformation. We all smiled with the sense that we had just been personally transformed – by the blessing of her presence.