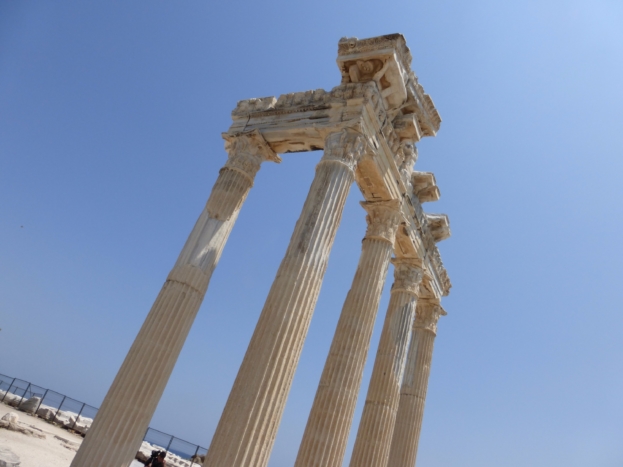 In Alberta, old was a “turn of the century home” not so very long ago. In England, my idea of “old” multiplied to hundreds of years old. In Antalya, old is measured in centuries. I kind of knew this was coming, but it is a bit mind boggling.

On Monday, Inci took us to explore the old town and I asked her when Antalya was founded. She wasn’t quite sure, but Hadrian’s Gate was built to welcome the Roman Emporer here in 136 AD. I concluded that Antalya has ALWAYS been here. The wheel ruts made by the Roman chariots and wagons are about 4 inches deep.

On Tuesday, we went to Side to see the Temple of Apollo and Athena. There are several such temples scattered around the ancient world, in case you think this is a bit confusing. This site dates back to the second century BC – so that would be 4000 years old – and there is also an amphitheater and a huge mess of leftover city that you can explore at your leisure. Being IN an amphitheater is Wow.

Rebecca commented to Inci that she must have seen these places many times…the words old rocks were upgraded to ancient rocks…less pretentious than Antiquities.

Yesterday, we went to the beach at Phaselis. This is like a provincial park with a really nice quiet beach, no beach chairs and umbrellas, and very few tourists. Lots of families – and also the site of an ancient harbour founded in 700BC by the Phaseliens – who apparently were not very good at repaying their debts. Pirates took over the harbour at one point, and later Hadrian was also welcomed with a gate – which still stands. The harbour eventually turned into a swamp and the site was abandoned. Our delightful tour guide treated this as quite incidental – not worth mentioning actually.

I have tried many times in my life to go see a Roman aqueduct. There are a few of them in the UK and in France, but somehow this fascination never worked out. In the last few days, I have seen several. We went a good half hour walk out of our way to find the first one in Istanbul, then found several others scattered around our walks, but Phaselis really made the point. The aqueduct is a car park. In Turkey, Antiquities are just about as common as potatos on PEI, and we are definitely the wide eyed visitors!!!

After Phaselis, we climbed a hill in Olympus to see the burning ground where gas escapes…