Roots, Rocks, and the Ring of Kerry 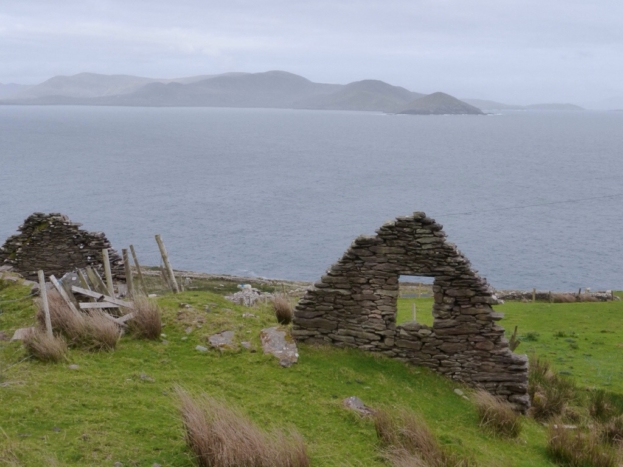 In the first post, I mentioned my Great-Grandmother Kells, and her mother, who emigrated from Ireland. They were strong women with great clarity, and for several decades, I avoided returning to Ireland because I thought I might discover that it was home and not want to leave. This was not unreasonable. The country is beautiful, the people take the time to stop and chat – but not for too long, and they are kind and gentle – once you break through the surface. The weather is damp and cold with gale force winds, and a woolly jumper and waterproof are always close at hand – even indoors. I feel very much at home.

At the end of the display, in the middle of the village, there is a stone cottage in ruins. The sign explains that this was the home of a pregnant widow and the mother of 5 children. She was evicted and her home abandoned. Many similar ruins can be seen throughout the Irish countryside. The thought crossed my mind that sometimes roots can look like rocks.

Over the course of the day, from Kells to the Ring of Skellig, to Bolis Head, we saw many of these cottages – all left in peace and in place as a quiet tribute to those who built them. Some were abandoned during the little Ice Age (1790’s), others during landlord clearances to set tree plantations, and most recently from the potato famine. The quiet insistence that humanity in the face of inhumanity be remembered and respected seems to steep the countryside with a kind of peaceful strength.

Our last stop of the day was personal visit to an artists’ retreat. It has been built in a restored village of stone cottages – redesigned to give beautiful light to sensitive creative people while they work – and to give them a space to create. One of the artists had spent time at the Banff Centre, and others had come from all over the world to spend time in this magical place. The location is a secret (I could not find my way back), the first ruins were abandoned in 1790, and the second set of ruins was laid out to protect all of the cottages from the winds by placing each in the wake of the next. Each cottage had two doors so that the cow could be let in to the house for milking, no matter which way the gale was blowing – and let out the other door. The woman who built the retreat started it in 1991 – the same year I got my job at the UofA.

We finished the day with Guinness, Jameson’s, some good music…and a couple of good stories on the way to bed…